Preventing Sexual Harassment on Campus: What Works – What Doesn’t

In early 2007 members of the St. Louis Branch made a commitment to work on a project relevant to AAUW issues.  We chose to forego regular branch meetings and focus on the project – sexual harassment on college campuses.  The St. Louis area has more than 17 major colleges and universities.  We investigated published sexual harassment policies to identify what institutions were doing about the issue.  We also sought ways to create awareness about the Legal Advocacy fund and how it might be a useful resource.

Our project co-chair, Connie Stoker, did a careful and thorough analysis of sexual harassment policies utilizing web sites and copies requested from various colleges and universities.  A spreadsheet was created so they could be assessed against specific criteria.

Below:  Jan Scott kicks off the forum 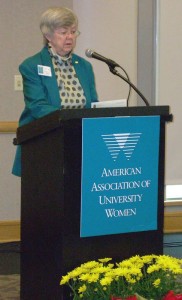 We then invited administrators from local colleges and universities to meet with us and brainstorm about how we could collaborate.  At one of those meetings, the idea of a forum on the prevention of sexual harassment was born and a date set – Spring 2008.  Jan Scott, project co-chair, then followed up with the University of Missouri-St. Louis to secure a location and a sponsor for the forum.  They willingly agreed.  Thus began our successful partnership with UMSL and Deborah Burris, director of their Office of Equal Opportunity.  She helped recruit a stellar panel of local authorities.  Meanwhile, Jan Scott coordinated with the Legal Advocacy Fund office at AAUW headquarters to secure a speaker.  Our president, Amy Weisser, wrote a grant request to the AAUW of Missouri Peg Witt Fund to assist with forum expenses.

Below: Lisa Maatz and panelists discuss the prevalence of sexual harassment with university and community representatives

The Sexual Harassment Prevention Forum was held on Thursday, March 13th, on the UMSL Campus.  We were fortunate that AAUW LAF sent us the very knowledgeable Lisa Maatz, director of government relations and public policy, as our keynote speaker.  She shared the findings of AAUW’s extensive research in this area and updated the audience on the bottom line:  Sexual harassment is now much more recognized, but still not reported by most. 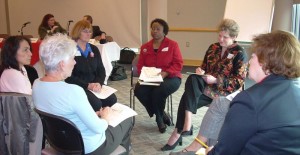 Following the panel’s presentations, the audience broke into groups to discuss the issue and brainstorm ideas which were then shared with the group. The overwhelming recommendation: “proactive awareness.”

Social Action Theatre: Student Affiliate member Angela Wright and AAUW husband and attorney Gene Stoker present a skit about a professor, a student, and a beer at the AAUW IBC luncheon 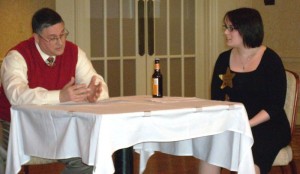 During our efforts to coordinate the forum, the LAF office alerted us to the Social Action Theatre that students can perform themselves to address sexual harassment issues on campus.  With a new student affiliate group forming at UMSL, it seemed the perfect project to send their way.  A performance was held on campus in November 2007 and later done as part of the program for the AAUW Interbranch Council luncheon in March 2008.