A Special Tribute to 250 Notable Women Who Have Contributed
to the City of St. Louis Over the Past 250 Years

The Saint Louis Branch decided on a project for the 2014-2015 AAUW year:  We planned to identify 250 notable women who have contributed to the history of the City of St. Louis.  We invited our AAUW university partners (St. Louis University, St. Louis College of Pharmacy, St. Louis Community College, and Washington University) to participate.  Our goal was to complete the project by February 2015 and join with the MO History Museum in the closing events for the St. Louis City 250th Anniversary. 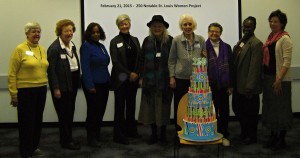 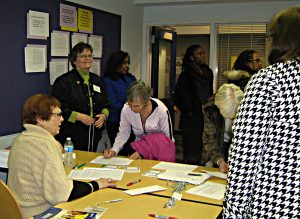 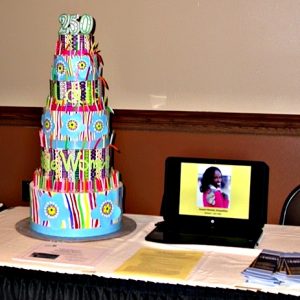 Bayless High School art students made a 250th anniversary cake for us. At the right were pictures of Notable Women scrolling on the laptop.

The audience gets ready for the presentation of our 250 Notable Women who have contributed to the City of St. Louis

We had a “repeat performance” of the program again on April 18, 2015, 2-4 PM, to members and friends who were unable to attend at the library at the home of branch director Fran Irwin.  We were pleased to have two more notable women in attendance.